If you were to ask someone who is committed to your success, “What would be the impact on my success, happiness and our relationship if I became a better listener?” What would they say?

And if you were ask that same person, “What has been the negative effect on my success, happiness and OUR relationship when I have been at my worse as a listener?” What would they say?

The audience of Harvard Business School MBA’s chuckled at the obvious “Gotcha!” I had just handed them because they knew the answer to the second question was of course “Large.”

“So why, if you know it’s so important, do you and most people do it so poorly?” I asked.

The most common answers are that people are in a rush, people are impatient listening to others and people are unaware of doing it.

I went on to explain that many people suffer from Momentum Deafness.  That means that “when you’re on a roll, smoke gets in your ears.”  Much of this is driven by your neurophysiology and hormones.  When you begin to talk it’s about having a conversation, but as you begin to talk more you release dopamine and that feels pleasurable.

At such a point, you can begin to lose awareness of the other person.  You don’t notice that they’re starting to fidget, because you’re just enjoying talking so much.  So as you continue to talk and your dopamine continues to flow, you don’t realize that you’re triggering an increase in cortisol in the other person.  Cortisol is connected to stress and unless they invited or wanted you to speak longer, you’re wearing out your welcome and you’re beginning to stress them out.

The more you do that, the more unwelcome you become and the more the other person begins to resent you.  When that happens, you’re going to demotivate or at least distract them from wanting to do something with you.

To find out if you talk too much, check out this article at HBR that explains the “traffic light” rule I learned from my friend, colleague and NPR host, Marty Nemko.

There is a silver lining and ironic opportunity to understanding how people like to talk more than they listen.  The more you enable the other person to talk and to open up about much more than they’re used to, the more invested they will be in what you then have to say.

To find out how to use this insight to your advantage, check out: “The Secret to Closing More Sales – Never Answer a Question in a First Conversation.”

As you become more skilled at this you’ll begin to notice the other person’s enthusiasm about what they’re saying.  When you begin to see “their” resultant dopamine driven enthusiasm about doing this with you and how that increases your impact and effectiveness listening will become more pleasurable to you than talking ever was.  That’s because instead of spinning your wheels you begin to feel traction with them and their momentum coming towards you. 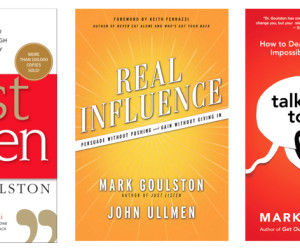