He’d pretend to be a suicidal policeman, holding a gun to his neck, threatening to take his own life.

His job was to challenge his audience — a room full of FBI agents and police officers — to talk him out of it.

“In the end, I always pulled the trigger and then from the point of view of that role play, I would tell them what they could have asked and could have said that would have caused me to give up and surrender,” explains Goulston, a psychiatrist and former FBI hostage-negotiation trainer.

Today, Goulston, 67, is a business advisor and consultant, using the skills he honed in his negotiation-training job to coach executives and employees at big corporations, including GE, IBM, and Goldman Sachs. He’s also the author of the best-selling book, “Just Listen: Discover the Secret to Getting Through to Absolutely Anyone.”

We recently spoke to Goulston to learn how to get people — clients, colleagues, employees, or a boss — to do what you want at work. Here’s what he said: 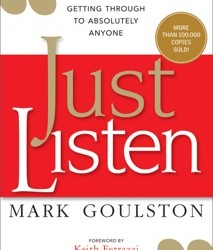 “Just Listen” becomes top book on listening in the world